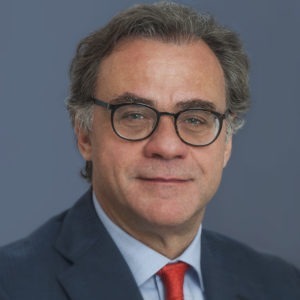 After having worked for many years in prominent Italian, English and American firms, Andrea started as partner at Ughi e Nunziante in June 2012. He was responsible for the department of capital markets (Equity) of a prime American study in Milan from 2002 to 2006, focusing on M&A, private equity, commercial law, financial and regulatory law (TUF – Italian Consolidated Law on Finance).

Graduated in Milan from Università Statale in the academic year 1990-1991, he subsequently attended a seminar on Legal Method at Columbia University of New York, Leyden, Netherlands (1992), a seminar on Intellectual Property at the Salzburg Seminar, Salzburg, Austria (1995) and many other seminars over the years.

He regularly collaborates with many independent European firms, mainly English, Spanish, Dutch and German, as well as American and South American, having consolidated significant professional relationships over the years.

He often attends seminars and conferences.

Andrea has been since 1993 a member of IBA (International Bar Association) and since 1995 of the Association Européenne d’Etudes Jurisdiques et Fiscales of which he has been national secretary for Italy since 1997.

He regularly works in Italian, English and Spanish and also speaks French.